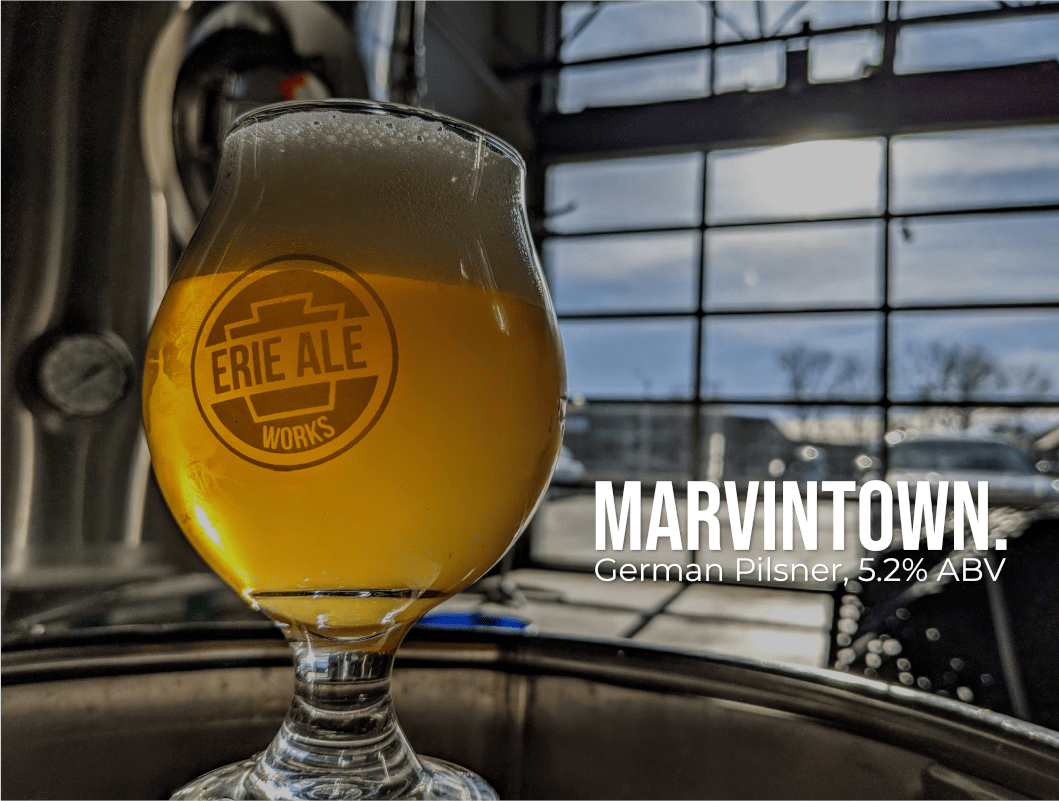 We first brewed our German Pilsner way back in the late part of 2021, launching it without a proper name other than “German Pilsner”. Naming beers can often be a tough task because of the sheer number of names already taken, plus choosing one that fits our general vibe can really put the old noodle into a spiral.

When our brains became tired enough from all the thinking on it we asked our Mug Club group to suggest names in exchange for a $5 donation to the Our West Bayfront neighborhood. Our West Bayfront is the organized name of the group in charge of beautifying and improving the area in which our shop exists. We accepted name suggestions and held one round of voting, again only Mug Club members could provide input. Marvintown was the clear winner, receiving double the votes as any other submission.

Marvintown is the name of Erie’s original German neighborhood centered around the intersection of East 28th and Parade Streets. This local website proved invaluable in learning more about this old neighborhood on Erie’s east side, a neighborhood that proved integral in the city’s early growth. Elihu Marvin, a farmer, divided up his property into parcels back in 1852-53 whose plots were predominantly secured by German Erieites looking to build their homes. Later on we learned from a lot of our customers they played baseball on the field that is now the East Side Wal-Mart, once called Marvintown Field.

What a fitting result – an early neighborhood whose name was chosen by a project where another, newer neighborhood, would benefit financially. This is one of the many reasons we enjoy our Mug Club group so much – we needed some slight assistance and they stepped right up!

Check out a pint of Marvintown, our German Pilsner. 5.2% ABV and available on draft at our shop or to go via crowler or growler. It’s a clean and crisp lager, one that is easily crushable in quantity this summer.